Armco Credit Union is the 2nd largest credit union in the Pittsburgh area. We operate branches located in Butler, Mars, Karns City and BC3 main campus as well as a full line of Online and Mobile banking options. We are a state-chartered credit union and governed by the banking laws of Pennsylvania. Deposits are Federally insured by the National Credit Union Administration, NCUA, an independent agency of the United States Government.

As a member of Armco CU, you are also a shareholder. Each member has equal ownership and has one vote in electing the Board of Directors – regardless of how much they have on deposit. We are governed by the Board of Directors, elected by and from the credit union’s membership. The Credit Committee and Supervisory Committee provide oversite and are also elected positions.

We exist to positively impact our members’ financial lives. We are able to achieve this in several ways…

First, we believe banking should be simple. Therefore, our products and services are simple and easy to understand. We do not bundle products or offer complicated rates or terms. This provides transparency to our members so they can easily compare our products to other financial institutions and make the best financial decisions. 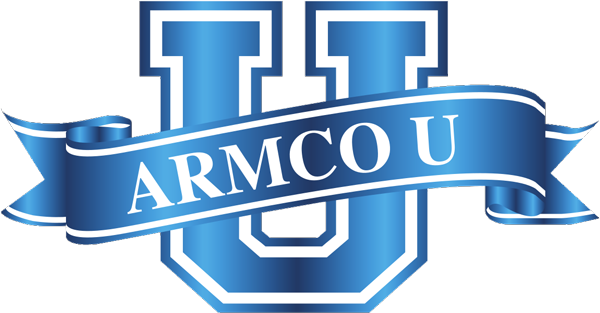 We also believe in educating our members so they can save and manage money wisely throughout all stages of life. We offer a library of financial related articles on our website as well as interactive coaching modules and various financial calculators. We invest in education by offering scholarships and sponsoring the Banzai financial literacy program in all high schools in Butler County.

We provide the same products and services as a bank. The difference is that a credit union is a not-for-profit financial cooperative owned solely by its members. Banks are responsible to stockholders so higher fees and loan rates are necessary to provide income to their stockholders. At Armco CU, our members are the owners. Our profits are returned to our members in the form of lower rates, higher savings rates and lower/fewer fees.

A small group of Armco Steel workers formed a charter on Feb. 26, 1935. The purpose was to “promote thrift among its members and create a source of credit for them, at legitimate rates of interest for provident purposes,” according to the charter document. The Butler ARMCO Employees Credit Union was founded with $900 in deposits by 15 members. By year end, assets increased to $1,896.44.

The credit union consistently increased in both members and assets each decade. By the late 1960s they had grown to nearly $4 million in assets. The office was located on the third floor of the Main Office Building at Armco Steel and was staffed by only 3 employees. They offered checking, savings and Christmas Club accounts and they only financed auto loans.

In the early 1970s the credit union relocated to the services building on the Armco grounds but quickly outgrew this modest building.

As the steel industry declined in the 1980s, the credit union made a bold move by building a new location outside the Armco gates. This move proved to be the catalyst for future prosperity. In 1989, a newly constructed $1.2 million building opened at the historic Pullman Center. They introduced new services such as ATM cards, credit cards and mortgages.

Also, in the 1990s, the credit union began partnering with local businesses called Sponsor Organizations (formerly called Select Employee Groups or SEGS). This allowed employers to offer credit union membership to their employees. Now, after careful review and approval by the Board of Directors and the PA Dept of Banking, other employer and associational groups can participate in the CU.

In 2018, the membership elected to change the legal name to Armco Credit Union to reflect the partnerships with over 150 SEGs as well as the acquisition of nine credit unions while still paying tribute to its steel heritage.

Armco Credit Union continues breaking records, offering new services, providing outstanding service and doubling down on its commitment to Butler County. Today they employ 75 employees and partner with 180 SEGs. New programs continue to be unveiled to provide value and convenience to members. In 2021, they opened a $5 million newly constructed branch in Mars to better serve members in southern Butler County. Also notable in 2021, Armco CU reached the milestone of $500 million in assets in December.

Even though banking has changed since 1935, we continue to honor our charter members by always doing right by our members – that’s why we have never raised the original $1.00 membership fee.

Where do we go from here? That’s up to you, the members!

For a better mobile banking experience, download the Armco CU app for your smartphone.  We do not recommend accessing the online banking platform through the website by using your mobile phone.  If you need assistance setting up mobile banking, contact us at 724-284-2020

Benefits of the Mobile App

No thanks, I'll download the mobile app another time (proceed to online banking)

We use cookies to ensure that we give you the best experience on our website.Ok